All articles tagged with "Humiliation"

Mistress Jardena gets guy to lick her asshole

Mistress Jardena was interested in torturing this guy and she did it with her asshole. He had to lick it and smell it. So he smelled it first and when he was done, she forced him to lick it. She loved how he did it and she even had an orgasm as he did and that is what made her forgive him because he had pleased her with his licking skills.

This mistress wanted to show this guy that he would be the loser if he messed with her. So she undressed and she used her big ass to smother him. She sat on his face painfully and went on to work on her laptop while her ass covered his entire face. He nearly choked before she got up from his face. He had learned his lesson by the time she was done.

Lady Rockabella puts on show for her boyfriend

Lady Rockabella is a naughty girl and she loves to do naughty things. Today was not an exception and she used that chance to turn on her boyfriend and tease him then deny him a little before she finally gave it to him. She showed him her dirty panties and she acted like a bad girl for him and he was turned on like he had never been turned on before.

Goddess Tempest forgives guy after sitting on his face

This guy admired mistress Carla's ass but he did not enjoy it to the end. She let him see it while she was only wearing her thongs and she even went ahead to make him watch as she wore different ones. But then she turned it into a fart thingy and she forced him to stay and smell her farts. She spread her ass cheeks to fart even better and ensure that the farts escaped.

Mistress Bruna and mistress Jeh played outside and they ended up with dirty feet. The mistresses did not want to get into the shower with dirty feet so they asked their slave to lick it. The slave hesitated and that pissed them off. Besides being made to lick them clean, the mistresses made him lick shoe polish and then had him lick the bathroom drain to teach him a cruel lesson.

Mistress Enola wanted to dominate this loser for all the wrongs he had done and she settled for her stinky feet and sneakers as her mode of punishment. He was forced to lie down and smell them as she ordered him and when he was done, the mistress trampled him a little bit before she let him go. She felt that he had learned his lesson and that it was enough.

Mistress Valeria is a sadistic girl and she loves it when others are in pain. The mistress wanted to dominate and have fun at the loser so she turned on him and she had him endure kicks to his balls. He was in a lot of pain in the process and had to beg her to stop until she eventually stopped. He ran away after he wore his clothes and they never saw each other again.

Mistress cuckolds boyfriend before dumping him 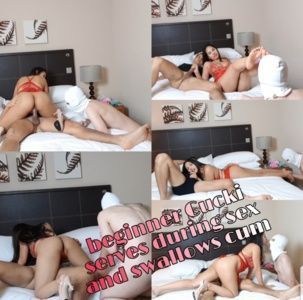 Mistress Iside did not approve of her boyfriend's drinking. He was always drunk on weekends and she did not like it. She had to do something to make sure things changed and that is why she had to do something she had never done before. She tied him up and she slapped the shit out of him until he learned never to drink to the point of being drunk. He slowly stopped drinking altogether.